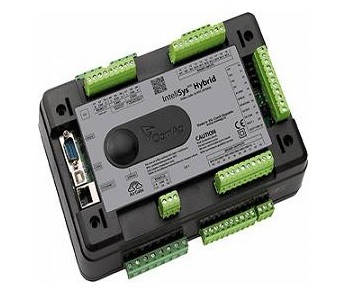 InteliSys NTC Hybrid Gen-Set Controller
InteliSys NTC Hybrid is a controller for applications that combine reciprocating gen-sets with renewable source of power.
It continuously monitors data from all sources of energy including solar, wind or hydro and gen-sets.
Should the energy production from the source of renewable energy drop below a certain threshold, the system automatically starts a backup diesel generator to ensure the continuation of power.
The ComAp controller automatically starts synchronizes and loads the gen-sets to run smoothly alongside the renewable source.
When the energy production from the renewable source becomes viable again, the system automatically cycles down the conventional generator.
Dynamic Spinning reserve function allows changing the amount of gen-sets running according to the amount of power produced by renewables to ensure that the system can cover the drop in the renewable generator output.
The controller can either receive the value from 3rd party device or it can calculate it in the built-in PLC.
InteliSys NTC Hybrid can manage the outputs from gen-sets of different sizes, power outputs and different manufacturers, in such case the Fuel Save mode will automatically choose the most efficient combination of gen-sets based on their size to save some extra fuel.
InteliSys NTC Hybrid provides interface to frequency inverters.
In case that gen-set runs under certain percentage of its nominal load the controller regulates the inverter output to prevent the engine from running under-loaded.